This journey started a while back, a few years ago by accident. I can’t really remember what the first TED talk I saw was, and at the time, I was not even aware of what TED really was. And then after a long time, I saw another. And then, it progressed into me being obsessed about the Talks to the point where I saw at least one TEDTalk almost every morning. That fizzled out eventually, but later my love for what TED got rekindled. Of course, one of the ways it got rekindled was through LeaderShape (I’ve said earlier that everything I’ll be posting on here has something to do with my experience at this leadership retreat)

One talk we were shown was by Benjamin Zander, the author of The Art of Possibility. If you’ve been following the blog, the name looks familiar. And that’s because I’ve written posts about him on this blog on how much inspiration he’s been to the life I’m living as a dreamer. You would have to see for yourself why I consider his one of my favorite talks. Below:

Fast forward a few months after LeaderShape, hundreds of TEDtalks videos, TedxHouston 2012 came around and I decided I was going to go attend it. Unfortunately, tickets ran out before I could get myself a spot in the audience. I went for one of the simulcast events where they show the actual event as it happens live.

Still continuing to watch religiously, now following updates – more especially from TedxHouston, I learned about some events they had, and decided to show up for one of them in April. Below is a screenshot of the outcome of me going there:

The poem in question is the poem I made to celebrate my 22nd birthday. There’s enough post already about why the poem is significant to me. Below:

The theme of the event was Positive Disruption, and I felt the poem and all it represents was tailored to that theme. I’m an introvert, and there are times I choose to keep quiet rather than share what I have to say because everything/one else is loud. The washing machine in my stomach is loud enough to drown the sound of my voice. I mounted up the courage to go before the audience and share the poem, and added that “being transparent and being vulnerable by sharing our own stories – fighting against our insecurities and perceived imperfections – is an act of positive disruption”

Fast forward to a few months after, I receive this in my email:

“…It’s my pleasure to invite you to perform at our TEDxGlobal simulcast on June 12th at START Houston!…” 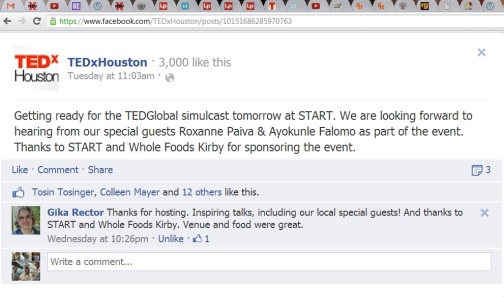 The theme for the TEDGlobal Conference, taking place in Scotland, which will be finishing today is #ThinkAgain. I was thinking of performing the poem Unmask again, and while I was trying to find sections of the poem I could tie to the theme, I realized that it wouldn’t be that fitting. And so, I had to… well, think again.

I decided to go with a poem I had written about 2 years ago (minus few months?) called STOP. I had performed it 2 times already so I was quite familiar and comfortable with it and decided it was a great choice for this event, especially since it lends itself beautifully well to the theme. And then with that settled, I had to fashion the content of my talk in a way that would make for a smooth transition to the poem.

Usually, it’s bound to happen: I start to question if it was in my place to talk about stopping especially since I have a hard time doing it – which in an ironic way is why I really really love the poem; it is a constant reminder for me that I just have to. I have the words memorized and I repeat the whole thing to myself whenever I feel the need to STOP. The response I got from people afterwards affirmed that it was indeed in my place to say what I had to say; that I was indeed supposed to be there! I’m super grateful! I love the fact that I was able to connect with the people in the room on a very personal level, the space that was created by their reception was warm, and felt really intimate. I loved every minute I spent there.

Of course, I should have made efforts to record or at least take pictures, but I did not 😦 I promise to find out if anybody recorded it (video or photo) and would like to share the files with me , so I can have it as some sort of souvenir for myself, and to share with others as well. If you’re reading this and you did (or know someone who possibly did), do get in touch. Thanks, I’ll love you forever if you do 🙂

Afterwards, Roxanne Paiva, the Founder of Our Global Village spoke about her organization and the amazing resources they provide to help with grassroots leadership across the world. In Houston, it’s through The Community Cloth, designed to help provide income for refugee women. She shared an interesting story about how she came about creating this organization following a trip to Thailand; and from having trouble finding a name for it – We are one? The one? before she settled for OGV – to struggling with the mission statement; to not having a team (except if you counted her mom, and friends who did not know what the heck they were doing. She admitted she still doesn’t know what she’s doing)

Eventually, we all settled down to watch the simulcast of the actual TEDGlobal Conference; videos from Session 6 (World on Its Head) and Session 7 (Regeneration) to be exact. All in all, it was quite a productive day! Certainly one to be remembered for the stories I hope to still tell. This IS something to me! It means quite a lot, but ironically, compared to what I still hope to do; it’s nothing!

*The next mission is joining TEDxHouston as speaker/performer for TedxHouston 2013, #TheOtherThings. A boy can dream, but one thing I do know: dreams do come true.

I hope I do get a copy of a recording of the event, but if I don’t, I have a transcript of the talk I gave (including the words to the poem) here, and you can download yourself a copy of it: Ayokunle Falomo: Think Again, TedxHoustonGlobal 2013

Yes! That dream of speaking at the TEDxHouston 2013 event did come true.

& two years later, for TEDxHouston 2015, I was again invited to be a part of the event, this time, to host one of the sessions. Considering it’s something I know how to do well, I started off with a poem.

You have to admit, it’s quite the journey!