I released kin.DREAD, my second book, into the world – a 200+ pg book that’s essentially a memoir interspersed with poems, reflections and stories told through the lens of kinship & dread. I am thankful that more than 100 people have a copy of the book since it’s been out in May. 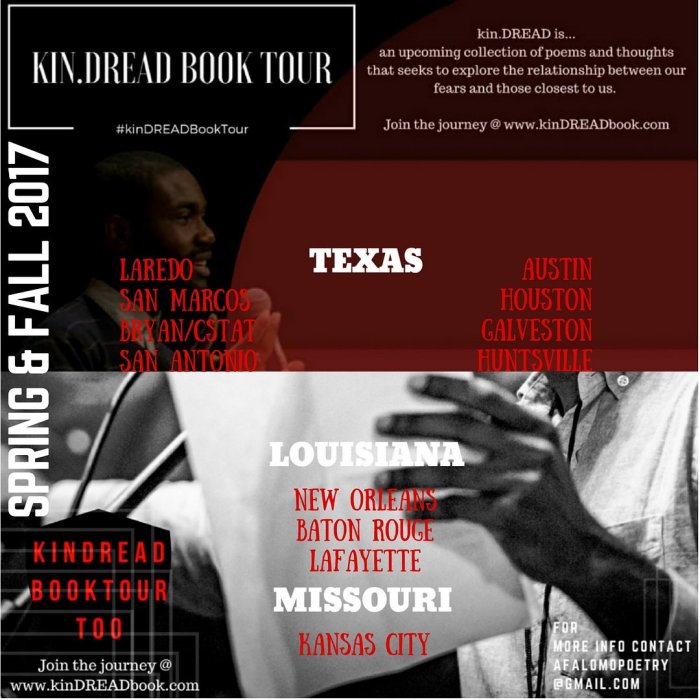 Outside of the official tours for the book, I had other opportunities as well to read from or share poems from the #kinDREADBook in Houston, Prairie View and Shreveport. Thanks to @TinteroProject, Marvin Smith (Notebook Assassins) and Gerald Cedillo.

Even outside that, I lent my voice alongside this generation of artists using their art as a means to resist. Thanks to the vision & leadership of Lupe Mendez (with the writers resist events) & @HannahABonner (with her work with @TheShoutHTX) + 100 Thousand Poets for Change…

As if being ‘a part of’ wasn’t enough (& I guess it wasn’t), I got the chance to cocurate a performance series with my choreographer friend, Rebecca French for @StationMuseum that gave space to queer, white, black, female, Christian, (Muslim, Mexican-)American, immigrant voices

Also, I taught poetry (workshops with the Partnership for the Advancement and Immersion of Refugees, Eclectic Truth, & a class for two weeks with Writers in the Schools (WITS), was part of panels, and competed in some major poetry competitions (Bayou City Slam, Red Stick Regional, and SouthWest ShootOut Regional – where I got third place) 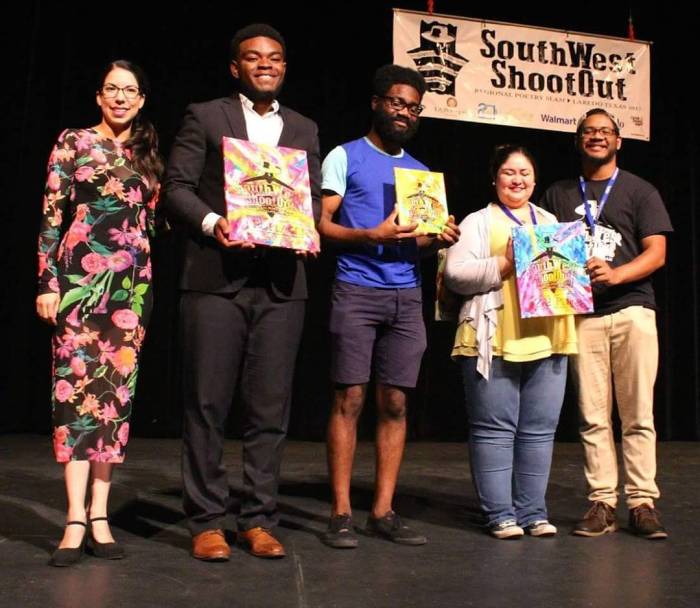 Also, my work was published/featured in:

I think that’s it. & yo, I did all these poetry things while working full-time as a school psychologist. & yo, I got paid for doing something I’d still do even if I wasn’t paid for it.

Anyways, all that to say don’t let nobody tell you what you can’t achieve in a day, week, month, year. Ever.

Aside from poetry, a lot of life happened. I was mostly in a state of constant overwhelm. I passed my licensure exam after the 3rd try. Harvey happened. That destabilized me a whole lot – especially mentally. Especially in regards to doing my day to day job. Many people stepped in – gifts and monetary donations from individuals, venues and organizations, ears to listen to vents, arms open wide for much needed hugs, doors opened, books mailed to replace the ones I lost in the flood… Yeah. And of course, there were other personal challenges as well, most of which I didn’t feel equipped to deal with.

But STILL, here I am.

My word for the year 2017 was BLOOM, and boy did I! Blooming is a beautiful thing when it happens. However, people just see the bright of the yellow and the red and purple. They often don’t see the dirt, the dew, etc. that allowed that blooming. And so, too, I am thankful for those who were both shade and water/soil and hands when I needed it most.

To say the least, 2017 has been a busy year. It’s why I had to take December to retreat. & I definitely as heck am looking forward to more of that in 2018.

As I’ve shared the word for the upcoming year towards the end of the last few years, mine for 2018 is STILL. I hope you all find that, in whatever way it might look like, for yourselves as well.

STILL here (at your service),

Ayokunle Falomo is a/an: Nigerian. poet. whose pen is a shovel to unearth those things that make us human. lover. of almonds. the color blue. hymns. grapes. conversations. and turkey bacon. TEDx speaker. author of the collection of poems titled “thread, this wordweaver must!”. dreamer. American. A kid in a 20-something year old body, he’s still as easily enthralled by the art and joy of creating as he was when he was six. He enjoys walking. And in real life, talks to and about himself (in third person). a lot.
Published December 31, 2017